Raising Children Bilingually through the ‘One Parent-One Language’ Approach

A Case Study of Japanese Mothers in the Australian Context

Parents who come from different language backgrounds often hope that their children will be able to speak the languages of both their parents. In families where this is the goal, the ‘one parent-one language’ approach (Ronjat, 1913) is widely used. The ‘one parent-one language’ approach is relatively effective in promoting active bilingualism among young children in a society where there is little support for the minority language. However, there is a general perception that maintenance of the minority language into middle childhood and beyond is difficult as during this period children’s contacts with the outside world expand and the input in the majority language increases. This book examines the sociolinguistic environment and the nature of parental input for children from Japanese-Australian families, who have been exposed to Japanese and English through the ‘one parent-one language’ approach in Australia. The research on which the book is based identifies factors which account for successful and unsuccessful cases of Japanese language maintenance of children from those families. The major part of this study involves discourse analysis of the conversations between four Japanese mothers and their primary school aged children based on audio-recordings over a period of 21 months. This qualitative approach is complemented by a quantitative study interviewing 25 Japanese mothers about their children’s language experience. 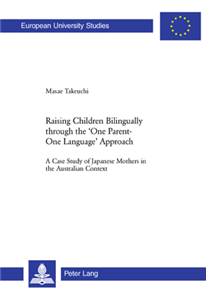