From Three Previously Unpublished Manuscripts On Angel Magic, Being a Complete Transcription of Tabula Bonorum Angelorum Invocationes in Manuscripts Bl Sloane 307 and 3821 and Bodleian Rawlinson D1067 and D1363

Stephen Skinner has been interested in magic for as long as he can remember. He wrote, with Francis King, the classic Techniques of High Magic in 1976. He followed that with Oracle of Geomancy and Terrestrial Astrology which has become the standard work on Western divinatory geomancy. Books on Nostradamus and Millennium Prophecies followed in highly illustrated editions. Stephen is also the author of eight books on feng shui, including the first one written in English in the 20th century. In the 1970s he was responsible for stimulating interest in John Dee and Enochian magic by publishing the first reprint of Casaubon's True and Faithful Relation of What Passed for Many Yeers between Dr John Dee and some Spirits. and Dr Donald Laycock's key reference book on the angelic language The Complete Enochian Dictionary. With David Rankine, he discovered what happened to Dee's most important manuscript, his personal book of angelic invocations which he kept in Latin, and how it was preserved and developed in the 17th century into a full working Enochian system. Only ten percent of this material reached the unpublished archives of the Hermetic Order of the Golden Dawn, and even this was then suppressed by the chiefs of the Order, so it did not appear in Israel Regardie's monumental work on the Order rituals and documents. They have also traced the routes down which were passed the classic techniques of invocation and evocation from late mediaeval grimoires, through Dee's magic, via Ashmole, and the aristocratic angel magicians of the 17th century, and Frederick Hockley to the senior magicians of the Golden Dawn. 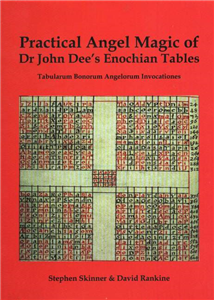