Promise and Perils of Public-Private Partnership in Education

Public–private partnerships have been in use for a long time, and in many countries, to build roads and bridges, clean rivers, and manage waste. In the last two decades, they have slowly begun to make their presence felt in the field of public education. Several countries, including the United States and India, have recently enacted laws that include partnerships with private entities as a vehicle for education reform. PPP Paradox discusses a swathe of PPPs in education and assesses their approach and contribution to genuine school change. This broad and even-handed survey of a variety of policy positions is followed by specific accounts of reform efforts in two case studies—one from a partnership in middle-school change in curriculum and instruction that took place in the state of Michigan in the United States, and the other from a partnership to bring Montessori education to government-run schools in Chennai, a large Indian city. 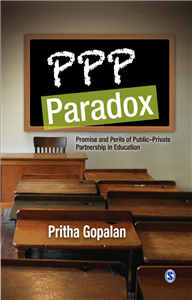