Politics and Teleology in Kant

This volume critically examines and elucidates the complex relationship between politics and teleology in Kant’s philosophical system. Examining this relationship is of key philosophical importance since Kant develops his political philosophy in the context of a teleological conception of the purposiveness of both nature and human history. Kant’s approach poses the dual task of reconciling his normative political theory with both his priori moral philosophy and his teleological philosophy of nature and human history. The fourteen essays in this volume, by leading scholars in the field, explore the relationship between teleology and politics from multiple perspectives. Together, the essays explore Kant’s normative political theory and legal philosophy, his cosmopolitanism and views on international relations, his theory of history, his theory of natural teleology, and the broader relationship between morality, history, nature and politics in Kant’s works. This important new volume will be of interest to a wide audience, including Kant scholars, scholars and students working on topics in moral and political philosophy, the philosophy of history, political theory and political science, legal scholars and international relations theorists, as well as those interested broadly in the history of ideas. 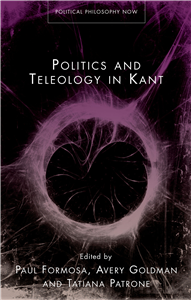 Tatiana Patrone is Associate Professor of Philosophy at Ithaca College, New York. Her research and teaching focuses on Kant’s ethical theory and current issues in applied ethics; Paul Formosa is Research Fellow and Lecturer at Macquarie University, Australia. He has published widely on topics in moral and political philosophy, in particular on Kant and moral evil; Avery Goldman is Associate Professor of Philosophy at DePaul University, Illinois. He teaches and conducts research related to Kant, post-Kantian German philosophy and Phenomenology.