The perfect way to learn how to recognise the stars and constellations, very accurate between 47° and 57° north latitude

This is a Dutch language planisphere for 52° north, perfect anywhere between 47° and 57° north, so perfect for the Netherlands and Belgium. It is a square design, 25 x 25 cm, folded and with four pages: one with the star chart/upper disc, one with instructions and a few interesting tips and two (the inside pages) containing a concise introduction to astronomy.

For use in for instance: Central European latitudes, Northern USA, Southern Canada and Central Asia. 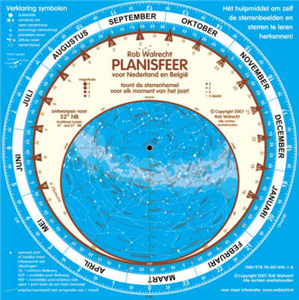