Philanthrocapitalism and the Erosion of Democracy

A Global Citizens’ Report on the Corporate Control of Technology, Health, and Agriculture

Philanthrocapitalism and the Erosion of Democracy: A Global Citizens’ Report on the Corporate Control of Technology, Health, and Agriculture details how global philanthrocapitalists like Bill and Melinda Gates and affiliated entities work to monopolize and privatize sectors of land use, food production, and public health on a global scale.

This anthology calls to account problematic initiatives that serve to corrode the integrity of democratic institutions, often under a banner of future-oriented innovation. This book lays bare the destructive power of overly capitalistic systems that enable mass human suffering and environmental catastrophe via the entanglement of private investment and public policy.

“Vandana Shiva is one of the great minds and truth tellers of our time. This book is a chilling and meticulously documented expose of the reckless and ultimately devastatingly dangerous use of philanthropy by a likely well intentioned technophile capitalist clueless about the needs of living people and the living Earth. A must-read warning for anyone concerned about justice, Earth, and the human future.” 一 David Korten, Author of When Corporations Rule the World; The Great Turning: From Empire to Earth Community; and Change the Story, Change the Future: A Living Economy for a Living Earth.

“In Philanthrocapitalism and the Erosion of Democracy, Dr. Shiva has once again laid bare the emerging threats to our democracy and living planet. Shiva states a compelling case that the digital barons are the new landlords, wielding their unregulated wealth and evading democracy in an attempted takeover of global agriculture. Authoritative contributors further elucidate the dangers of genetic theft, protraction of the Green Revolution legacy, and terrifyingly bold genetic extinction technologies. The reader is left mortified and fully convinced that “Land Back” to Indigenous communities and a return to agroecology is the path to a livable future on planet earth.” 一 Leah Penniman, Co-Founder of Soul Fire Farm, author of Farming While Black 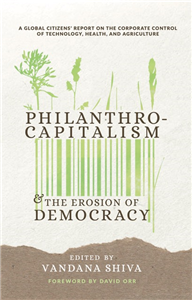 “Philanthrocapitalism is a remarkable effort, led by the great Vandana Shiva, to expose and oppose a growing dangerous tendency by corporate powers to capture, control, and destroy some of America’s most vital philanthropic movements; movements that seek to expose and disempower the rising dangerous powers of corporate dominion and fascism. This is a brilliant and vital work to offset the efforts of corporate America to disguise its purposes, and its efforts for dominion.” 一 Jerry Mander, author of the bestselling book, Four Arguments for the Elimination of Television

Dr. Vandana Shiva is an author, physicist, ecologist, and advocate of biodiversity conservation and farmer’s rights. Her pioneering work around food sovereignty, traditional agriculture, and women’s rights created fundamental cultural shifts in how the world views these issues.

Along with Jerry Mander, Edward Goldsmith, Ralph Nader, and Jeremy Rifkin, Dr. Shiva is a leader and board member of the International Forum on Globalization and a prominent figure of the global solidarity movement known as the alter-globalization movement.

Dr. Shiva founded Navdanya, an organization that promotes agroecology, seed freedom, and a vision of Earth Democracy, seeking justice for the Earth and all living beings. She has authored more than 20 books including Reclaiming the Commons: Biodiversity, Indigenous Knowledge, and the Rights of Mother Earth (Synergetic Press, 2020), Philanthrocapitalism & The Erosion of Democracy: A Global Citizens’ Report on the Corporate Control of Technology, Health, and Agriculture (Synergetic Press, 2022) and Agroecology and Regenerative Agriculture: Sustainable Solutions for Hunger, Poverty, and Climate Change (Synergetic Press, 2022).

Dr. Shiva is a member of the scientific committee of the Fundacion IDEAS, Spain’s Socialist Party’s think tank and the International Organization for a Participatory Society. She received the Right Livelihood Award in 1993, an honor known as an “Alternative Nobel Prize”. She has received numerous other awards and honors for her work including the “Save the World” award in 2009 and the Sydney Peace Prize in 2010. Dr. Shiva’s life and work is the subject of the award-winning 2021 documentary, “Seeds of Vandana Shiva.” 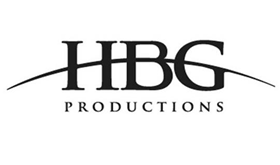 HBG Productions has chosen to review this offer before it proceeds.