With an introduction by Philippe Garner. The post-Fascist Italy of the early 1950s saw an explosion in international film production, and as stars flocked to Rome – followed by models, playboys, and monarchs – the city was transformed. The rich and beautiful congregated in villas, nightclubs and Via Veneto cafés, and the media was quick to capitalise on the drama of these glamorous personalities. A small band of press photographers were the very first to document this ‘Hollywood on the Tiber’ phenomenon, and in doing so they revolutionised their art form forever. Their methods were new, rapid and inventive; they worked hard and fast to be the first on the picture desks and from there, the front pages of the world’s papers. These men would later be dubbed the ‘paparazzi’, and they changed the face of photojournalism. Among their number was Elio Sorci. Sorci was a strategic mastermind, with an independent spirit and unparalleled appetite for adventure that made him a leader in his field. His was the image that finally confirmed the Elizabeth Taylor–Richard Burton affair. His photograph of fellow paparazzo Tazio Secchiaroli being chased by the antagonised Walter Chiari set a radical precedent for modern paparazzi photography. His stripped-back images depict this world just as it was, often tinged with vulgarity and essentially superficial, but thrilling, compelling, and seductive. Paparazzo is the first definitive collection of his award-winning work across four decades. Each frame captures the vitality and excitement of ‘la Dolce Vita’, while revealing something of the charm, vivacity, intuition, and tenacity of the man himself. 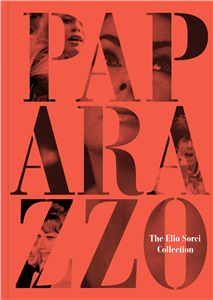 Philippe Daniel Garner is a Director of Christie's, and their international head of photographs and 20th century decorative arts and design since 1971.

ROADS is a contemporary and highly creative lifestyle brand based in Dublin, Ireland. The Group consists of three companies: ROADS Fragrances, ROADS Publishing and ROADS Entertainment. Founded by businesswoman and entrepreneur Danielle Ryan, the brand is built around the cornerstones of present-day culture, freethinking, storytelling, original design and intelligence. ROADS acts as a curator, researching and filtering interesting contemporary subject matters or themes. These themes then create the platform for each of our projects, be it a book, film or fragrance. ROADS – as a name – is a metaphor for the many choices and decisions we are faced with each day. These decisions shape us and make the paths for how we live. Every choice we make – what we wear, what we read, where we travel, how we communicate – informs our character. Therefore ROADS celebrates the individual in every sense.

Roads Publishing has chosen to review this offer before it proceeds.