A Novel of Intrigue

Over the Shoulder offers a unique view of the American dream and what this means for Allen Choice, Korean American protagonist and reluctant investigator, shaken from the doldrums of his insulated life. Choice and his partner, Paul Baumgartner, are security specialists for Silicon Valley executives. When Paul gets killed on the job, Choice and an inexperienced Bay Area reporter, Linda Maldonado, begin looking into the puzzling circumstances of the murder. As they work together to unravel the intricate threads of lies and half-truths, they discover that his death might be linked to an older, more personal one - the mysterious death of Allen's father some twenty years earlier. With his self-described "philosophy of removement" as his frame of reference, Choice searches for the hidden, long-buried answers, only to be outmaneuvered at every juncture. Against this backdrop of violence and deception, Choice soon discovers secrets that alter his understanding of his father, of his family - secrets that lead him to a buried history of betrayal. 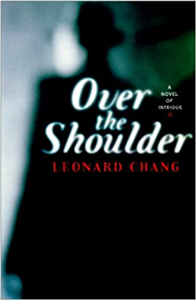 All translation rights available through Eulama

A hybrid of crime and literary novel that explores issues of honor and family history, Over The Shoulder offers a unique view of the American protagonist and reluctant investigator, shaken from the doldrums of his insulated life.

A new direction for noir fiction, Over the Shoulder is an examination of the past and the present, of long-simmering familiar tensions and the subtle conflicts of race and class; it is a story about the awakening of memories and an understanding of the self.

"Anonymity is both existential goal and survival skill for Allen Choice, who may call himself a Korean-American but who isn't particularly comfortable with the label. A Silicon Valley security specialist (don't call him a bodyguard), Choice drifts through life the way he drifts through crowds: detached, isolated, neither particularly fulfilled nor particularly unhappy. He notes wryly, "I used to think I was in inertial rest, a body at rest remaining so. Once an outside force applied itself to me, I would be in motion. I liked this idea. It freed me, relieving me of the responsibility." But in Over the Shoulder, Leonard Chang's brooding neo-noir novel, circumstances conspire to administer an outside force of momentous proportions when Paul Baumgartner, Choice's partner, is killed in front of him. Paul's family, his employers, and the police all assume the hit was directed at the executive the pair were protecting. But Linda Maldonado, a reporter looking for a hot story to catapult her from the thigh cream comparisons and doggy-daycare features of the Lifestyles pages, hectors Choice into investigating Paul's death. His investigation is quickly fractured by treachery and deception, as he uncovers strange links between Paul's death and that of his own father, an immigrant who died in a warehouse accident when Choice was 8. Elegantly captured in Chang's restrained prose, secrets and memories rise slowly to the surface, forcing Choice to confront both the long-hidden scars of familial bitterness and the poignancy of his father's quest to preserve his dreams of a medical career, even as he succumbed to the exhausting drudgery of physical labor.
Over the Shoulder, though leavened with a touch of dry humor, doesn't pull any punches, as Chang lays bare his protagonist's frailties and fantasies."
--Kelly Flynn, Amazon.com Review
"Despite the bang with which it starts, this is no action thriller rocketing along; instead it's a tortuous journey of discovery by its Korean-American protagonist and narrator, Allen Choice. Separated from his family by death and alienation, Choice is a loner and somewhat of a cipherish bachelor, a college dropout, a bodyguard for a private protection service. Everything changes when his partner is shot dead while they're on a routine job babysitting a Silicon Valley executive. Choice's introspective, ruminative nature -his "disease" as he describes it -is shaken by this murder and by the Kafkaesque events that follow. Nudged by an aggressive reporter, Linda Maldonado, Choice begins to consider various possibilities that his partner, not their client, was the target -or even he himself. Choice finds his investigation anticipated or derailed at every turn, inevitably forcing him to learn more about his heritage and his past, including the death of his father when he was only 10. Chang's intricately constructed plot moves easily from the minutiae of protecting a client to the cultural rootlessness affecting his hero. Choice's dual journey -of self-discovery and the uncovering of his partner's killer- makes for an absorbing blend of literary novel and crime thriller. "
_ Publishers Weekly

Leonard Chang is the creator of Allen Choice, a Korean-American security expert turned private eye who has so far appeared in three novels, Over the Shoulder (2001), Underkill (2003) and Fade to Clear (2009), a USA Today Summer Reading Pick and a finalist for the Shamus Award. His first two novels, The Fruit 'N Food and Dispatches from the Cold, garnered much praise for their deft handling of racial tension, thwarted dreams and existentialist angst. For The Fruit 'N Food, he won the Black Heron Press Award for Social Fiction. His second novel, Dispatches from the Cold, won a San Francisco Bay Guardian Goldie Award for Literature. His books have been translated into French, Japanese and Korean, and are regularly studied in literature, sociology and theology courses throughout the U.S., Europe and Asia. Recently the U.S. Consulate in Berlin sponsored his multi-city lecture/reading tour of Germany.In addition to novels, he writes short stories, essays, screenplays and TV. He's currently a writer and executive producer for the FX TV show Snowfall.