Opportunity Dubai is the autobiographical account of a real-life business adventure in the modern city of Dubai. The author was a financial journalist in the city before deciding to join the internet revolution in 2000 by establishing the financial information website AME Info (www.ameinfo.com).However, this book is far more than the story of a relatively small business and its success (albeit a business that became a resource now used by millions of readers and sold for a multi-million dollar fortune in 2006). It is also an inside track on what is happening in modern Dubai, the focal point of hundreds of billions of dollars of investment, and a city whose GDP has quadrupled in a decade, outperforming any other in the world, including China.The author charts the progress of Dubai in the 2000s and setbacks such as the Second Gulf War and 9/11, which actually proved the source of a remarkable injection of repatriated capital into the increasingly ambitious projects of the Maktoum family under the leadership of His Highness Sheikh Mohammed bin Rashid Al Maktoum.Perhaps, as the trading hub of the Middle East, it should be no surprise that Dubai has been able to capitalise greatly on the Third Oil Boom. But Sheikh Mohammed's restless business vision never stands still. He created the Dubai Internet City in late 1999, just in time in fact to give the author of this book a dedicated free zone with 100 per cent ownership for his small business. And other developments such as the Burj Dubai and The World Islands proceed at an amazing pace.Opportunity Dubai asks where this is all leading to and whether it can be sustained. However, the author's own experience of prospering from the opportunities presented by this incredible city point in a positive direction; and many of his insights will benefit anybody thinking of joining this adventure, whether doing business in Dubai, buying a home there, or just taking up a job as an expatriate. 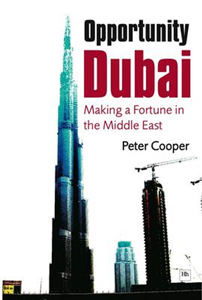