North Korea continues to make headlines, arousing curiosity and fear in equal measure. The world’s most secretive nuclear power, it still has Gulag-style prison camps, allows no access to the Internet and bans its people from talking to foreigners without official approval. In this remarkable and eye-opening book, internationally best-selling author Paul French examines in forensic detail the history and politics of North Korea, Pyongyang’s complex relations with South Korea, Japan, China and America, and the implications of Kim Jong-un’s increasingly belligerent leadership following the death of his father, Kim Jong-il. As an already unstable North Korea grows ever more unpredictable, antagonizing enemies and allies alike, North Korea: State of Paranoia delivers a provocative and frightening account of a potentially explosive nuclear tripwire. 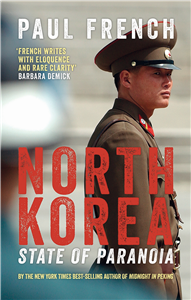 A gripping and provocative account of one of the world’s most secretive countries.

An admirably clear and calm survey of one of the hardest countries in the world to report on.' Jonathan Steele, The Guardian 'Highly readable ... a solid overview of the country’s modern history and how it became a failed state ... admirably clear and refreshingly devoid of academic gobbledygook.' The Wall Street Journal 'Fascinating ... highly readable.' The Daily Telegraph 'Paul French writes with wit, eloquence and rare clarity about the complicated history of North Korea.' Barbara Demick, author of Nothing to Envy: Real Lives in North Korea 'If much reporting on North Korea is hysterical, even at times grotesquely comical, French has gone the other way ... [a book] written with a brisk confidence.' David Pilling, Financial Times `North Korea's ability to worry and shock remains perhaps the only predictable aspect of the country's behaviour. Paul French's no-nonsense approach to understanding the country's history, political system, ideology and what remains of its decimated economy is one of the best introductions to a country that does all it can to resist outside inspection and comprehension. This is the most accessible starting point for anyone wanting to understand the hermit kingdom.' Kerry Brown, professor and director, China Studies Centre, University of Sydney 'This clear-eyed overview to North Korea’s modern history is packed full of fascinating detail. French ably outlines the hermit kingdom’s ideology, economic system and haphazard efforts at reform, while simultaneously revealing why pickpockets target Kim Il-sung badges, what the North Korean cabinet’s position is on lice and why smoking can be a small act of resistance.' Louisa Lim, Beijing correspondent, NPR

Born in London and educated there and in Glasgow, Paul French has lived and worked in Shanghai for many years. A leading expert on North Korea, he is a widely published analyst and commentator on Asia and has written a number of books dealing with China's pre-1949 history and Asian politics and current affairs. His previous books include a history of North Korea, a biography of Shanghai ad man and adventurer Carl Crow, and a history of foreign correspondents in China. Paul was awarded the 2013 Edgar for best fact crime for his international best-seller Midnight in Peking.