An Argument for the Judicial Settlement of International Disputes with a New Introduction by Charles F. Howlett

This new edition of Nicholas Murray Butler's The International Mind marks the 100th anniversary of its publication. Widely read at the time, it has reached the status of classic work. Butler is one of the 20th Century’s most famous college presidents. He transformed Columbia University into a famous research institution of higher learning. More importantly, this work still has an important message for today’s readers: how can we establish an international mind that builds a lasting peace for the world. This work is based on Butler’s famous speeches as president of the Lake Mohonk Conferences on International Arbitration, which took place just prior to the start of World War 1. Butler was a strong proponent of judicial internationalism and education as the mechanism through which the settlement of disputes between nations could be resolved. As head of the just-established Carnegie Endowment for International Peace’s Division of Intercourse and Education, Butler put forth his own views on international understanding. Later, Butler would become president of Carnegie’s Peace Endowment and was most responsible for helping to bring forth the 1928 Kellogg-Briand Pact, renouncing war as an instrument of national policy. In 1931, based on his efforts for world peace, which began at Lake Mohonk (NY), Butler shared the Nobel Peace Prize with Jane Addams._x000D_ _x000D_ This new edition has a scholarly introduction as well as an extensive bibliographic essay on American Peace Writings by Charles F Howlett. An added feature to this new edition is a listing of Butler’s most notable works, the platforms of the 1907 & 1912 Lake Mohonk Conferences, and an lengthy 1914 interview with Butler by New York Times reporter, Edward Marshall. Readers will find the appendices an added bonus to a now classic work._x000D_ _x000D_ This new edition of Butler’s important book will bring to light one of the early 20th century peace classics devoted to the study of international arbitration. It offers a clear and compelling argument as to the importance of internationalism as proposed by some of the more prominent educational leaders, statesmen, and jurists of the pre-World War 1 period. Most importantly, reissuing this work in its one hundredth anniversary year bears testimony to its lasting importance since Butler’s efforts and those at the Lake Mohonk Conferences on International Arbitration led to the creation of a Permanent Court of International Justice only a few years after the conclusion of the First World War. 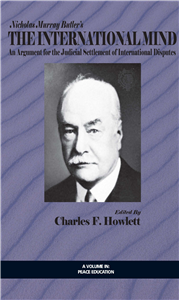