The action takes place in 2020, in a world that has survived a severe crisis, which has been affected by a new type of Ebola virus. Almost all major states — the USA, Russia, China — plunged into chaos. The European Union was able to avoid such a fate, but here the ultra-right came to power and managed to use the fears of the population concerning the possible chaos and uncontrolled streams of millions of migrants from the deadly pandemic Africa and Asia.

What happens if another global crisis destroys the world we are used to? One of the options is described in Moscow Wall. Russia, the United States and China superpowers have fallen. In united Europe, the ultra-right have come to power, trying to manage the flow of millions of migrants and ensure oil and gas supplies from Russia, which has plunged into chaos.

This is the new Middle Ages. It is no wonder that Moscow, which has become a base for the European army, is surrounded by a 30-meter wall, and the forests near Moscow are full of partisans. The protagonist, an Englishman with Russian roots, goes to Russia «on a business trip», but he will have to solve much more difficult tasks than he had presumed. To understand the Russians and to find out why the entire world has fallen is beyond his official mission. 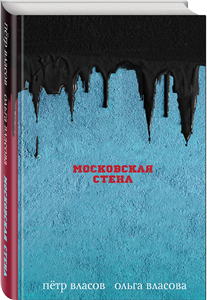 Peter Vlassov is a Russian journalist and writer. Graduated from Moscow State University with a degree in international journalism. He worked at the ITAR-TASS news agency in London. Peter Vlassov is a founder and first editor-in-chief of the RBC business magazine and the RBC daily business newspaper (2006–2009). He also worked as deputy chief editor for gazeta.ru, as vice-rector at the Moscow State Institute of Culture. Since November 2019, the chief editor of the newspaper «Culture».