Throughout Argentina’s history, authors and important political figures, such as Presidents Domingo Sarmiento and Juan Perón and the writer Julio Cortázar, have lived and written in exile. Exile is a vital theme and a practical condition for Argentine literature. As a country that in its modern history has welcomed mass immigration and political exiles from Europe and the rest of Latin America, contemporary Argentina is also a nation shaped by the work of immigrants. The case of poets is particularly important; poetry is often perceived as the least directly political of genres, yet political and other forms of exile have impinged equally on the lives of poets as on any group. This study is thus the first to focus specifically on the displacement-poetry link in the case of Argentina. The corpus includes poets who are influential, recognised, but in general have not enjoyed the detailed study that they deserve: Alejandra Pizarnik, Juan Gelman, Osvaldo Lamborghini, Néstor Perlongher, Sergio Raimondi, Cristian Aliaga, and Washington Cucurto, all presented with generous selections of poems and original translations into English by the author. As well as thematic innovation, the study offers methodological advances, in particular by applying the tools of cultural studies to the study of poetry: close readings, combined with contextualisations, and theoretical works from contemporary philosophy, political theory, and economics. Beyond the fields of Argentine and Latin American studies, the work examines the many ways in which authors and intellectuals can be, perceive themselves to be, or write as, exiles. The work also aims to follow a series of recent debates about the relationship between politics and poetry, demonstrating the continued relevance and viability of the political reading of poetry. 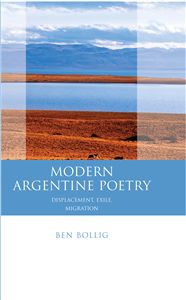