Meyer ("Mike") Berger was one of the greatest journalists of this century. A reporter and columnist for The New York Times for thirty years, he won a Pulitzer Prize in 1950 for his account of the murder of thirteen people by a deranged war veteran in Camden, New Jersey. Berger is best known for his "About New York" column, which appeared regularly in the Times from 1939 to 1940 and from 1953 until his death in 1959. Through lovingly detailed snapshots of ordinary New Yorkers and far corners of the city, Berger's writing deeply influenced the next generation of writers, including Gay Talese and Tom Wolfe. Originally published in 1960 and long out of print, Meyer Berger's New York is a rich collection of extraordinary journalism, selected by Berger himself, which captures the buzz, bravado, and heartbreak of New York in the fifties in the words of the best-loved reporter of his time. 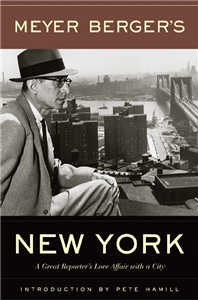