Comprehensive, trusted core text on media’s impact on attitudes, behavior, elections, politics, and policymaking, written by Doris Graber, a scholar who has played an enormous role in establishing and shaping the field of mass media and American politics. Graber’s book has set the standard for the course. Mass Media and American Politics is known for its readable introduction to the literature and theory of the field, as well as staying current with each new edition when it comes to new and social media, media ownership, the regulatory environment, infotainment, and war-time reporting. The book includes a wealth of data in tables, figures, boxes, and features photos and political cartoons. 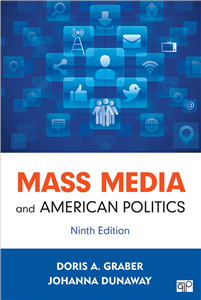