Meditations on the Political and Biopolitical

In this ambitious book, Brett Levinson explores the possibilities for a genuinely radical critique of globalized culture and politics - at a time when intellectuals and nonintellectuals alike struggle to understand the configuration of the contemporary world. Levinson seeks to unsettle a naturalized and commonsensical assumption: that democracy and the economic market must be viewed as either united or at odds. Against both neoliberalists and cultural pluralists, he argues that the state is not yielding to the market, but that the universe now turns on a "duopoly" between statist and global forms, one that generates not only economic and cultural sites but also ways of knowing, a postdemocratic episteme.;Touching upon current issues such as terrorism, human rights, the attack on the World Trade Center, and the notion of the "people," delving into the idea of biopolitics, and investigating the essential relation between language and political praxis, Levinson engages with the work of Giorgio Agamben, Jacques Ranciere, Etienne Balibar, Michael Hardt, Antonio Negri, Michel Foucault, and others. Levinson offers no solutions, but his work will be an important voice for readers looking for conceptual tools to grasp what political and intellectual possibilities might exist in the postcommunist world and how this world has come to be shaped in our time. 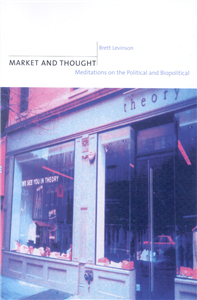