Microprocesses of Democratization in Nepal and its Neighbours

This volume, the first in a new series on governance, conflict, and civic action in South Asia, focuses on the larger countries of South Asia—Pakistan, India, Bangladesh, Sri Lanka, and especially Nepal. The 15 essays in this volume analyze democracy both as a process and as a value. The essays also examine in ethnographic detail the way in which democracy is actually experienced in South Asia, ranging far beyond conventional political structures to look at conflict resolution, rhetorics of foreign aid, ethnic organizations, Maoist practices of local government, Dalit resistance, and so on.

Many of the processes that are analyzed in depth in the Nepalese context are shown to have their analogues in other South Asian countries. By putting Nepalese political and social processes firmly within their South Asian context, the current political crisis in Nepal is shown to be neither so radically new and different, nor so insoluble as it might appear. At the same time, the view from the peripheries of South Asia throws into relief the extent to which India has evolved away from the traditional caste-determined patron-client structures that once formed the framework of political action there.

The volume is a significant contribution to the study of how local democracy actually operates in South Asia. It will be of interest to political scientists, sociologists, anthropologists, and development specialists. 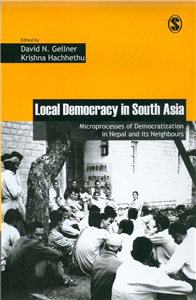