Time, Space and the Broadcast Event

In this fascinating and accessible book, author Stephanie Marriott engages in a close and detailed analysis of the nature of live television. The book examines the transformations in our experience of time and space which are brought about by the capacity of broadcasting to bring us the world in the moment in which it is unfolding, situating the live television event in the context of an expanding and increasingly complex global communicative framework. Building her argument by means of a series of case studies of events as diverse as the assassination of President Kennedy in 1963, the attack on the World Trade Centre in 2001, the 2005 London bombings, election night coverage and live sports coverage, the author provides a meticulous and articulate account of the way in which live television mediates the event for its audience. 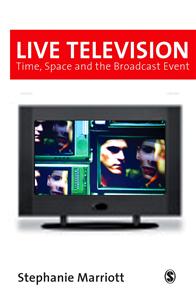