For centuries, historians have speculated about the life of Katherine Jones, Lady Ranelagh. The details of her relationship with Robert Boyle, her younger brother, have mostly remained a mystery, even though Boyle, “the father of chemistry,” spent the last twenty-three years of his life residing in her home, with the two dying only one week apart in 1691. The dominant depiction of Lady Ranelagh shows her as a maternal figure to Boyle or as a patroness of European intellectuals of the Hartlib circle. Yet neither of these portraits captures the depth of her intellect or range of her knowledge and influence. Philosophers, mathematicians, and religious authorities sought her opinion on everything from decimalizing the currency to producing Hebrew grammars. Lady Ranelagh practiced medicine alongside distinguished male physicians, treating some of the most elite patients in London, and her medical recipes and testimony concerning the philosophers’ stone both gained international circulation. She was an important influence on Boyle and a self-standing historical figure in her own right. Chemistry’s Sister fills out Lady Ranelagh’s legacy in the context of a historically sensitive and nuanced interpretation of gender, science, and religion. It reveals how one elite seventeenth-century woman, without suffering attacks on her “modesty,” managed to gain the respect of diverse contemporaries, effect social change, and shape science for centuries to come. 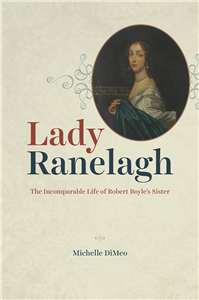 Michelle DiMeo is the Arnold Thackray Director of the Othmer Library at the Science History Institute in Philadelphia. She is the coeditor, with Sara Pennell, of Reading and Writing Recipe Books, 1550-1800.