'A book that will delight students. Key Texts in Human Geography is a primer of 26 interpretive essays designed to open up the subject's landmark monographs of the past 50 years to critical interpretation. The commissioned essays aim to assess the impacts, responses, significance and legacies of the books they discuss while evaluating their key arguments and providing a guide to how they should be read. In this sense, the book is brilliantly successful. The essays are uniformly excellent and the enthusiasm of the authors for the project shines through.

For those students who would have engaged with the original texts anyway, this will be an invaluable companion; for many others, it will be an invaluable crib sheet. for my money, this is as good a list as any and one that accurately reflects the curricula of the courses for which it is designed. it will find itself at the top of a thousand module handouts' - THE Textbook Guide

'Key Texts in Human Geography will surely become a 'key text' itself. Read any chapter and you will want to compare it with another. Before you realize, an afternoon is gone and then you are tracking down the originals.' - Prof James D Sidaway, School of Geography, University of Plymouth

'An essential synopsis of essential readings that every human geographer must read. It is highly recommended for those just embarking on their careers as well as those who need a reminder of how and why geography moved from the margins of social thought to its very core' - Barney Warf, Florida State University

Undergraduate geography students are often directed to 'key' texts in the literature but find them difficult to read because of their language and argument. As a result, they fail to get to grips with the subject matter and gravitate towards course textbooks instead.

Key Texts in Human Geography serves as a primer and companion to the key texts in human geography published over the past 40 years. It is not a reader, but a volume of 26 interpretive essays highlighting:

" the significance of the text

" how the book should be read

" reactions and controversies surrounding the book

David Harvey 'The Condition of Postmodernity' (1989) 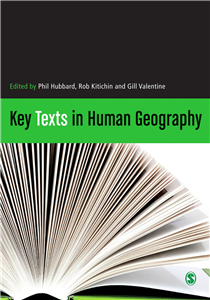