The inaugural title in the Correlates of War series from CQ Press, this 2-volume set catalogs every official interstate alliance signed from the Peace of Westphalia in 1648 through the early twenty-first century, ranking it among the most thorough and accessible reviews of formal military treaties ever published. Maps and introductions showcase the effects of alliances on the region or international system in century-specific chapters, while individual narratives and summaries of alliances simultaneously provide basic information, such as dates and member states, as well as essential insights on the conditions that prompted the agreement. Additionally, separate and/or secret articles are highlighted for additional context and interest.Supplementary features of this two-volume set include:A timeline cataloging major events in political and military historyGuides listing allegiances by region and by centuryAn alphabetical treaty indexMaps illustrating political boundaries across the centuriesInternational Military Alliances is an indispensable resource for any library serving students of law, politics, history, and military science. 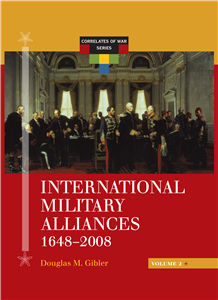