With entries from leading international scholars from around the world, the International Encyclopedia of Political Science provides a definitive, comprehensive picture of all aspects of political life, recognizing its theoretical foundations and including empirical findings from across the globe. The eight volumes examine all the main subdisciplines of political science and include coverage of comparative politics, epistemology, political economy, political sociology, and international relations.

Entries are arranged in alphabetical order, and a list of entries by subject area appears in the front of each volume for ease of use.

The Encyclopedia contains a detailed index as well as extensive bibliographical references. Approximately 80 entries on the use of both qualitative and quantitative research methods in political science are provided.

The process of democratization will remain a vital topic during the 21st century, and the encyclopedia contains extensive coverage of the evolution of democracy as well as other political systems. Readers will find theoretical and empirical background on other important issues such as global security, the relationship between religion and the state, and political issues related to gender and race/ethnicity.

The International Encyclopedia of Political Science provides an essential, authoritative guide to the state of political science at the start of the 21st century and for decades to come, making it an invaluable resource for a global readership, including researchers, students, citizens, and policy makers. 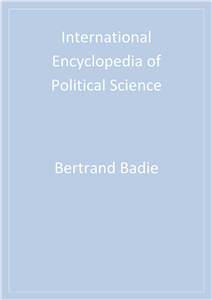