The Challenges of Rapid Growth

This is the first comprehensive account of various components of the Indian microfinance sector, the largest in the world. After reviewing the main challenges facing the sector, it analyses the progress of the two main delivery models, issues relating to the emerging microfinance services of micro-insurance and money transfers, ongoing efforts in training and capacity building, opportunities facing commercial financers such as bankers and social venture capitalists, the remaining need for development financing, and ongoing research in the sector.

The main challenge facing the sector is identified as the need to enhance borrower, public and regulatory support and understanding, by increasing transparency in dealings with borrowers, and by 'educating' the public on why microfinance interest rates have to higher than bank lending rates if microfinance institutions are to recover costs and attain viability. Failures in both these areas led to a highly publicized attack in 2006 on the sector by the state government of Andhra Pradesh. While the sector weathered the storm, it needs to take serious note of the lessons, which are analysed in a separate chapter.

The book will be of interest to various players in the sector including practitioners, bankers, insurance companies, venture capitalists, regulators, donors and academics. Given heightened interest in the sector with the Nobel prize awarded to Muhammad Yunus and the Grameen Bank, it will be of even greater interest than before to the intelligent layman and the development community generally. 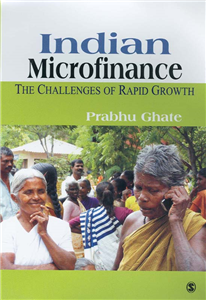