Indian Media in a Globalised World

This book explores the transformation of Indian media in the context of two major developments: globalisation, which has introduced what are termed as 'foreign' elements to Indian culture, and the opening of the floodgates for foreign media to enter the country. It discusses both theoretical considerations and empirical studies related to the role of Indian media.

Indian Media in a Globalised World adopts a multi-disciplinary approach and looks at the role of media in purveying political, economic and cultural identities. It brings to light the current definitions of 'we' and 'they', the 'other', and how the 'other' is sought to be perceived in contemporary India.

The discussions cover all forms of media, that is, newspaper, films, radio, television and online media, along with media policy and the challenges facing the media.

The book will be useful to students and scholars studying media and communication studies, journalism, political science and sociology. It will also be an enlightening read for anybody interested in tracking the Indian media and its development. 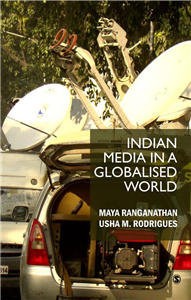