In the Footsteps of Enayat Al-Zayyat

‘In the Footsteps of Enayat Al-Zayyat’ is a book that traces the life of an unknown Egyptian writer who died in 1963, four years before the release of her only novel. The book does not follow a traditional style to present the biography of Al-Zayyat, or to restore consideration for a writer who was denied her rights. Mersal refuses to present a single story as if it is the truth and refuses to speak on behalf of the heroine or deal with her as a victim, but rather takes us on a journey to search for the individuality that is often marginalised in Arab societies. The book searches for a young woman whose family burned all her personal documents, including the draft of her second novel, and was completely absent in the collective archives.

The narration derives its uniqueness from its ability to combine different literary genres such as fictional narration, academic research, investigation, readings, interviews, fiction, and fragments of the autobiography of the author of the novel. The book deals with the differences between the individuality of Enayat, who was born into an aristocratic family, graduated from a German school and wrote her narration during the domination of the speeches of the Nasserism period, and that of Mersal, a middle-class woman who formed her consciousness in the 1990s and achieved some of what Enayat dreamed of achieving but remained haunted by her tragedy.

The book deals with important political, social and cultural issues, as we read the history of psychiatry in modern Egypt through the pills that Enayat swallowed to end her life on 3 January 1963, while her divorce summarises the continuing suffering of women with the Personal Status Law. We also see how the disappearance of a small square from her neighbourhood reveals the relationship between modernity and bureaucracy, and how the geography of Cairo changes, obliterated as the result of changes in political regimes. In the library of the German Archaeological Institute, where Enayat worked, we find an unwritten history of World War II and, in her unpublished second novel, we see unknown stories of German scientists fleeing Nazism to Cairo. We also see how Enayat’s neglected tomb reveals the life story of her great-grandfather, Ahmed Rashid Pasha, and the disasters buried in the genealogy tree. 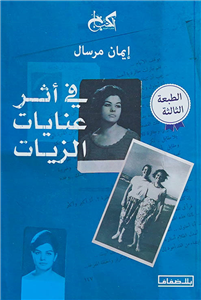 Winner of the 2021 Sheikh Zayed Book Award for Literature

Iman Mersal is an Egyptian poet, writer, academic and translator. She works as an Associate professor of Arabic literature and Middle Eastern studies at the University of Alberta, Canada and currently resides in Marseille, France, where she holds the Albert Camus chair at IMéRA, the Institute for Advanced Study of Aix-Marseille University until July 2021, while working on a book entitled Al Laknah: Al Sawt fee Ghair Makaneh (Accent: the Displaced Voice). An anthology of her works was translated into more than twenty languages and she has five poetry collections published. Her most recent published works include Hatta Atakhlla Aan Fekrat Al Boyot (Until I Abandon the Idea of Homes) in 2013, Kayfa Taltaem: Aan Al Omoma wa Askhbahuha (How to Amend: On Motherhood and its Ghosts) in 2017, and Fee Athar Enayat Al Zayyat (In the Footsteps of Enayat Al-Zayyat) in 2019. Her book, Mamar Moetem Yasloh fee Talom Al Raks (A Dark Path Suitable for Learning to Dance), is one of the most important poetry books issued by the generation of the nineties in Arabic poetry.