In Custody examines the professed and actual commitment to custodial justice on the part of six South Asian countries. India, Pakistan, Bangladesh, Nepal, Sri Lanka and Afghanistan have all been affected by the geopolitics of colonialism. Nineteenth century Europe is often simplistically seen as the ideological source of the rights discourse in South Asia. But, like any ideological theme, the discourse on rights is also a negotiated space. Resistance created a need to justify imperialism by importing a purpose to it. Regulation of policing was the coloniser's superior norm, and also, his tool of control. The erstwhile colonies inherited the practice of affirming norms while systems enabled their breach. Which is not to say that the purpose of norms is merely hypocritical; political struggles and intellectual discourse have, over the years, ensured the recognition of human rights in international instruments, national charters and even in the very pretexts for their breach. Though human rights are inalienable, the modern state has been uniformly guarded in its response to their imperatives. This book traces the historical and contemporary nature of the conflict between the norm and its practice. Constitutions, statutes and mechanisms of justice are reviewed with case studies and interviews that illustrate the many layers of impunity. 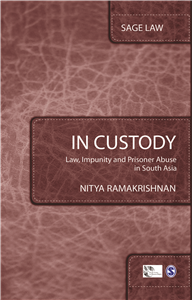