I Guess We Missed the Boat

When eight intrepid travelers, brought together by marriage and with retirement in common, sit reminiscing about their travel experiences, the memory banks open and humorous events start to spill out. Cowboy Ron, Ed the Negotiator, Joke-a-Minute Jim, and Practical Carol are part of the motley crew that experiences skiing mishaps, malfunctioning airplanes, a near fistfight on a cruise ship on the azure seas of the Caribbean and trying to explain ice hockey to some African children.

The author balances many more challenges of travel with vivid descriptions of visits to exotic locales and philanthropic activities to help the less fortunate around the world. This is a great vacation read or of interest to anyone interested in a light, entertaining book. Readers have enjoyed the descriptions of the various locales and the characters who appear throughout the book. 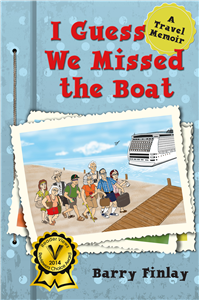 “Hilarious at times - a recommended read for those wanting a good laugh.” - Jan Heart

“I Guess We Missed The Boat is a fresh, ironic and jovial travel adventure novel in which each traveler can recognize himself or herself. It is a travel book that is amusing and practical at the same time.” - Reader Views

“I really enjoyed this book! I think this is a great read. It definitely lightened my day…” - Shirley Priscilla Johnson

In 2009, Barry Finlay went up a mountain as an accountant and came down as an author and philanthropist. After over thirty years in various financial roles with the Canadian federal government, he took his life in a different direction and climbed Africa’s Mount Kilimanjaro at age sixty with his son Chris.

The climb and their fundraising efforts to help kids in Tanzania led to his first book, Kilimanjaro and Beyond: A Life-Changing Journey, written with his son. It is a very personal account of what it means to reach a goal and to help others achieve theirs. The book is not only inspirational, but also highlights the preparation required for such a climb and what to expect while doing it. Barry explains how reaching the summit with his son and meeting some children in Tanzania were both life-changing events in his life.

He followed that up with the hilarious travel memoir, I Guess We Missed the Boat, which was named Best Travel Book of 2013 by Reader Views. The book is a great vacation read as he and his in-laws, all retirees, sit around in a hotel room in Miami reminiscing about some of the hilarious events that have occurred during their travels around the world.

Now, Barry has completed his debut fiction book, The Vanishing Wife, which received an award for the best e-book in the mystery/thriller category from New Apple Literary Awards. It follows a mild-mannered accountant as he is forced to exchange his spreadsheets for a Glock 17 and track down his wife of 20 years who disappears on their anniversary. The trail takes him and a friend on a terrifying journey from their home in Gulfport, Florida to Ottawa, Canada.

Barry was named to the Authors Show’s list of “50 Great Writers You Should Be Reading” in 2012. In 2013, he received the Queen Elizabeth Diamond Jubilee medal for his philanthropic work in Africa.

He is currently working on a sequel to The Vanishing Wife.

Barry Finlay lives in Ottawa, Canada with his wife Evelyn.