At the center of “Hungry Generations” is the great European piano virtuoso Alexander Petrov, one of the émigré geniuses who lived in the incredible community of gifted Europeans in Los Angeles during the Second World War. Fleeing from Nazi Germany, the legendary classical pianist – like Schoenberg, Stravinsky, the Werfels, and the Manns – settled in L.A. and attempted to raise a family there on the edge of the Pacific.

In September of 1972, Jack Weinstein – a young composer and a distant relation of Petrov – is newly arrived in L.A., living near Venice beach and seeking a job in the movie studios. Jack develops a friendship with the émigré virtuoso, who is nearing seventy and struggling to maintain his psychic and physical health in the midst of intense conflicts with his wife and his adult children. The renowned pianist tells the young man stories of his life from the thirties to the present, and soon Jack is absorbed into the family life of the Petrovs.

Jack becomes a catalyst for confrontations among the Petrovs, as he intrudes on the family’s delicate balances. He falls in love with the pianist’s daughter, Sarah, who becomes Jack’s troubled muse, and in one climax, the father erupts in jealousy and desperation, assaulting his daughter’s lover. The son Joseph Petrov is a gifted, cynical, intense pianist himself, who also befriends Jack; resentments – new and old – build between son and father, and these too erupt in destruction and self-destructiveness. Also, Joseph is gay, and after a surreal New Year’s Eve party at the Polo Lounge, he makes a pass at drunk, dismayed Jack. Then there is Petrov’s wife, Helen, and her confession to Jack is one of the final assaults on the young composer.

The remarkable expatriates living in Los Angeles during World War II figure both in Petrov’s stories and in Jack’s inner struggle to resurrect himself in the face of his experience of the Petrovs, of music, of sex, of the movie studios, of L.A. itself. During the year 1972-73, Jack composes a piano sonata infused with his love of Petrov’s famed recording of Beethoven’s Hammerklavier Sonata as well as the music of Stravinsky and Schoenberg – those composers even begin to enter Jack’s dreams, simultaneously blessing and critiquing him as he works in his Venice apartment.

Hungry Generations paints a vivid portrait of the conflicts and struggles which erupt in L.A.’s singular expatriate community. At the center of the novel is finally the confrontation between émigré parents who survived the Holocaust at the peculiar remove of Los Angeles and their grown children. Each “hungry generations” reveals its yearning for meaning, love, and transcendence. 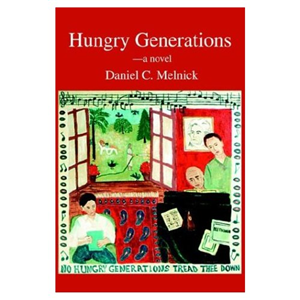 From Cleveland Plain Dealer: In this “poetic” novel, “the friendship [of the young composer Jack Weinstein with the great virtuoso pianist Alexander Petrov and his son, Jacob] is more than combustible; it marks a collision of cultures and worlds: Petrov’s Europe, decimated by the Nazis, versus Jack’s Hollywood.”

From London Times Literary Supplement: “’Hungry Generations’ is a thoughtful and engaging novel” and “for those who love music, supremely satisfying.” And “if Adorno had been a novelist he might have written of Petrov’s world and hiss musical sensibilities. Melnick seems to have absorbed the tragedy of music which Adorno knew so well. ‘Hungry Generations’ gives a vivid picture of Los Angeles…Against this background, Daniel Melnick depicts a tragic conflict between an old man and his son.”

Daniel Melnick is originally from Los Angeles and was educated at U.C. Berkeley. He has taught English at Berkeley, Cal State Fresno, Cleveland State University, and now Case Western Reserve University. He lives with his wife, the artist Jeanette Arax Melnick, in Cleveland, Ohio. He is an amateur pianist, and his love of music is evident in both "Hungry Generations" (2004 – about émigré European musicians living in Los Angeles from the 1940s to the 70s) and in his scholarly study of Proust, Mann, and Joyce, "Fullness of Dissonance - Modern Fiction and the Aesthetics of Music" (1994). He is also the author of a series of stories and critical studies of modern literature, as well as three other novels: "The Ash Tree" (2015) about the aftermath of the Armenian Genocide for an Armenian-American family in California; "Acts of Terror and Contrition" (2011) about an alternative history of Israel's response to the first Iraq War in 1990-1; and an unpublished novel about a pathologist and his family living in Los Angeles in 1962.