How to Label a Goat

The Silly Rules and Regulations That Are Strangling Britain

Have you ever thrown your arms up in despair while trying to complete an official form and asked yourself "Just what is the point of this?" You're not alone.Red tape in Britain has reached epidemic proportions. In just 12 months the Government produced a shocking 3,621 pieces of legislation, running to a total of 98,600 pages. That's 70 times as long as War and Peace!If it wasn't so serious, it would be quite funny.In this new book, Ross Clark exposes some of the most petty and bizarre rules and regulations which are blighting the lives of Britons today. From the 45 pages of instructions on how to correctly label a goat (or sheep) to the impact that being a deep-sea diver might have on your tax return.Among his other discoveries are:- That there are 279 different tax forms for businesses alone, asking a total of 6,614 questions.- The notes explaining the Treasury's 'simplified' pensions' regime ran to 1,369 pages.- The law allows you to kill or give away a bullfinch - but not to sell or barter it.- A woman from Kilbride was given an ASBO forbidding her from answering the door in her underwear.- A council spent "5,000 planting yew trees to screen a new children's play area. It then dug them up again after health and safety experts advised children could fall ill if they gobbled 'several handfuls' of leaves.All completely true and all contained, along with hundreds of others, in this eye-opening new book.Red tape and more red tape...- One Police force discovered that it had a total of 1,150 different forms on which to report crimes.- There are 1,300 pages of road traffic law - and that does not even include the law preventing petrol stations selling hot food after 11pm unless they apply for a licence.- Employers must not hold important meetings on 31 October - it might discriminate against pagans, who, of course, celebrate the festival of Samhain on that day.- A motorist in Waltham Forest, East London, was fined for parking on double yellow lines that were not even there when he parked his car. The lorry painting the lines had drawn around the stationary vehicle.- The following things have been reported to be banned in at least one school: making daisy chains (risk of picking up germs); playing hopscotch (risk of injury); making anything out of egg boxes (fear of salmonella); putting hands up (makes pupils who don't have the answers feel victimised); and throwing paper aeroplanes (might cause eye injuries)... 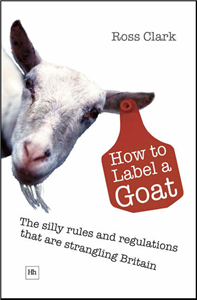