Everyone has had the frustrating experience of putting something down and then forgetting where. Although there are many factors that contribute to the ability to remember; it is also a simple fact that some people are better at remembering than others. Outside influences like stress, hormone problems, or even the side –effects of medications can make people absentminded and forgetful. But what if your memory is simply getting progressively worse? Are you frequently embarrassed at not being able to remember someone’s name? Have you ever driven away from a petrol station and genuinely forgotten to pay? Are these episodes of memory loss driving you to despair? If so, then this book by Miller Caldwell is not only going to amuse and entertain you, but it will provide you with many serious tips and selfhelp exercises that will help you train your brain all over again! Mr Caldwell begins by explaining his own diagnosed condition called mild cognitive impairment (MCI) and the frustration he felt at having to retire early because of shortterm memory loss. He explains in simple terms how the human brain processes our thoughts and then stores them in preparation for recall. He explains how in most people, sharp thinking and reasoning skills are unaffected by shortterm memory decline and suggests that, if an older person learns information in the right way, he or she is just as likely to remember it as a younger counterpart. Each helpful tip and suggested exercise comes with an anecdote from Caldwell's many varied and fascinating life experiences, including how he almost married the wrong woman! Presented in a delightful and straightforward format, this book will be an invaluable companion to those of us who are just a little bit forgetful or, equally, to those in the early stages of dementia. Oh, and just in case you forget, the charming cover illustration of an elephant with a knot in its trunk will remind you to pick up a copy of your own. 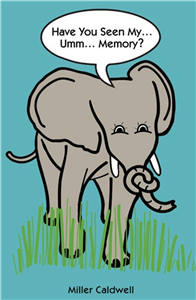