The main character is a young girl named Hatless who lives in the City of Hats. Here, all of the people are born with hats that cover their heads and faces. The world inside of their hats is dark, silent, and odorless.

Hatless feels trapped underneath her own hat. She wants to take off her hat, but she is afraid, until she realizes that whatever frightening things exist in the world around her are there whether or not she takes off her hat to see them.

So Hatless removes her hat.

As Hatless takes in the beauty of her surroundings, she cannot help but talk about what she sees, hears, and smells. The other inhabitants of the city ostracize her because she has become different from them. It is not long before they ask her to leave the City of Hats.

Rather than giving up or getting angry, Hatless feels sad for her friends and neighbors who are afraid to experience the world outside of their hats. She comes up with an ingenious solution: if given another chance, she will wear a hat as long it is one she makes herself. The people of the City of Hats agree, so Hatless weaves a hat that covers her head and face but does not prevent her from seeing the outside world. She offers to loan the hat to the other inhabitants of the city. One by one, they try it on and are enchanted by the beautiful world around them. Since then, no child has been born wearing a hat. The people celebrate by tossing their old hats in the air.

By bravely embracing these values, Hatless improves her own life and the lives of her fellow citizens.

Buti’s language is eloquent and clear. She strikes a skilled narrative balance between revealing Hatless’s inner thoughts and letting the story unfold through her interactions with other characters. Careful descriptions are accompanied by beautiful illustrations that reward multiple readings of the book. 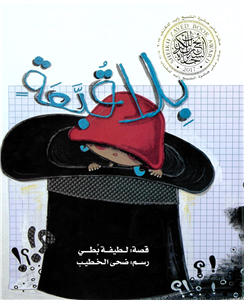 Latifa Butti is a Kuwaiti Author specialized in children’s literature. Her portfolio extends from stand-alone novels, theatrical works, publications in magazines and periodicals, to works in radio and television. She has several independently published works including The Mermaid and My Country, Ininkayo in addition to theatrical acts such as Juha’s Gate and Salma the Princess of the Sea. Butti is also a regular contributor to the well-known magazine Al Arabi Al Sagheer and worked on a number of radio-based programs and series targeting adolescents. He works in television were mainly with Al Jazeera Children Channel and Al Baraem Channel, focusing on the cultural heritage and folklore of the Arab region.

The Sheikh Zayed Book Award was established in October 2006, in memory of the late ruler of Abu Dhabi who was President of the UAE for over 30 years. The Award, which has different categories, is presented annually to writers, intellectuals and publishers as well as to young talent whose writings and translations of humanities have enriched Arab cultural, literary and social life.