Towards an Inclusive Theatre

Anjum Katyal's work is the first comprehensive study on the life and contribution of Habib Tanvir to Indian theatre history. A playwright, director, actor, journalist and critic, Tanvir is perhaps best known for the play Charandas Chor. However, his real significance in the history of post-Independence Indian theatre is that he signposted an important path for the development of modern theatre. His productions with Naya Theatre using Chhattisgarhi folk actors established how one could do modern theatre integrated with age-old-yet equally contemporary-folk culture on a basis of equality. Habib Tanvir: Towards an Inclusive Theatre explores various important aspects of Tanvir's theatre philosophy and practice as he experimented with both content and form. Starting with his early life and work, Katyal charts his professional trajectory from Agra Bazaar to Gaon Ka Naam Sasural, when he was searching for his true form, to Charandas Chor, which portrayed the eventual maturing of his style, and beyond, to cover his entire oeuvre. 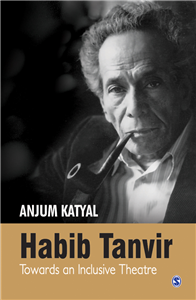