Gothic Machine is a ground-breaking exploration of relations between Gothic literature, pre-cinematic media such as magic lanterns, phantasmagoria and dioramas and the first films 1670-1910. Starting with the earliest projections of horror images, continuing through the development of Gothic fiction and drama and closing with the first Frankenstein film, this study is a fascinating and pioneering evaluation of relations between these different media. As early as 1800, the Marquis de Sade identified Gothic novels such as The Monk and The Mysteries of Udolpho as ‘phantasmagoria’. This work explores the reasons why and, amongst the other mysteries broached en route is the reason that our first view of Dracula on English soil is described by Bram Stoker as a ‘diorama’. That doyen of tales of terror, Sheridan Le Fanu is revealed to be a literary magic lanternist, as is Robert Louis Stevenson. Symbolist visions of spectral automated chanteuses and demonic panoramas are discussed as are the darkest fantasies of J-K Huysmans and the earliest film-makers. This study, which moves between detailed study of the work of specific showmen and artists in relation to media histories and, elsewhere, much wider and more general surveys of cultural expression of these processes, is driven by historicist thought throughout. The author’s argument is audacious and bold, challenging critical orthodoxies on spectrality and the envisioning of ghosts. As the cultural detective who re-discovered the setting of E.G. Robertson’s convent Phantasmagoria, Dr. Jones is in a unique position to explore the performative aspects of this famous spectacle. The author explores five key periods in Germany, Britain, France and America over the designated span. Finally, the widely-ranging discussion crosses the line between pre-cinematic shows and cinema proper revealing how the new technology itself became a haunted, Gothic medium. 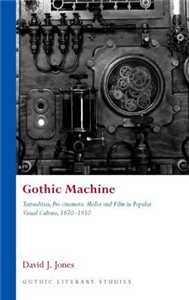