His Life and His World

This is the first English-language biography of the relentlessly ambitious and incomparably talented printer Giambattista Bodoni (1740-1813). Born to a printing family in the small foothill town of Saluzzo, he left his comfortable life to travel to Rome in 1758 where he served as an apprentice of Cardinal Spinelli at the Propaganda Fide press. There, under the sponsorship of Ruggieri, his close friend, mentor, and protector, he learned all aspects of the printing craft. Even then, his real talent, indeed his genius, lay in type design and punchcutting, especially of the exotic foreign alphabets needed by the papal office to spread the faith.
His life changed when in 1768 at age 28 he was invited by the young Duke of Parma to abandon Rome for that very French city to establish and direct the ducal press. He remained in Parma, overseeing a vast variety of printing, some of it pedestrian, but much of it glorious. And all of it making use of the typefaces he personally designed and engraved.
This fine book goes beyond Bodoni's capacity as a printer; it examines the life and times in which he lived, the turbulent and always fragile political climate, the fascinating cast of characters that enlivened the ducal court, the impressive list of visitors making the pilgrim- age to Parma, and the unique position Parma occupied, politically Italian but very much French in terms of taste and culture. Even the food gets its due (and in savory detail). The illustrations—of the city, of the press, of the types and matrices—are compelling enough, but most striking are the pages from the books he designed. And especially, pages from his typo- graphic masterpiece, the Manuale Tipografico, painstakingly prepared by his wife Ghitta, posthumously published in two volumes, and displaying the myriad typefaces in multiple sizes that Bodoni had designed and engraved over a long and prolific career.
Intriguing, scholarly, visually arresting, and designed and printed to Bodoni's standards, this title belongs on the shelf of any self-respecting bibliophile. It not only makes for compelling reading, it will be considered the biography of record of a great printer for years to come. 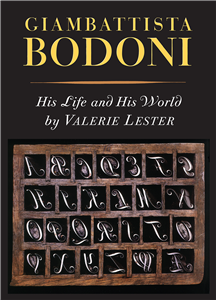 Valerie Browne Lester is an independent scholar, writer, and translator living in Boston. She is the author of Phiz: The Man Who Drew Dickens (2004), a biography of Hablot Knight Browne, Dickens's principal illustrator who was also her great-great-grandfather. She translated Alain-Fournier's Le Grand Meaulnes (The Magnificent Meaulnes, 2009), and has written poetry, plays, & articles.

David R. Godine, Inc., is a small publishing house located in Boston, Massachusetts, producing between twenty and thirty titles per year and maintaining an active reprint program. The company is independent (a rarity these days) and its list tends to reflect the individual tastes and interests of its president and founder, David Godine.

David R. Godine, Publisher has chosen to review this offer before it proceeds.