Featuring everything from sports stadiums to shopping malls, hundreds of new cities in China stand empty, with hundreds more set to be built by 2030. Between now and then, the country's urban population will leap to over one billion, as the central government kicks its urbanization initiative into overdrive. In the process, traditional social structures are being torn apart, and a rootless, semi-displaced, consumption orientated culture rapidly taking their place. Ghost Cities of China is an enthralling dialogue driven, on-location search for an understanding of China's new cities and the reasons why many currently stand empty. 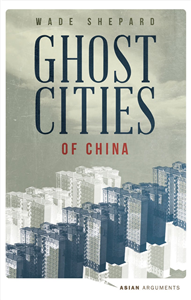 Looking through the lens of new cities, Ghost Cities of China shows the "new society" that's being created to live in them.

In Ghost Cities of China, Wade Shepard guides us on a comprehensive - yet still often intimate - tour of cities "that are just being born." Through in-depth engagement with the country's vast urbanization efforts, Shepard exposes both the myths and realities of China's ghost cities; haunted spaces, which are not dead and abandoned, but rather have yet to come to life.' Anna Greenspan, author of Shanghai Future: Modernity Remade 'In his exploration of East Asian cities that are literally disposable, Wade Shepard provides an intriguing overview to a phenomenon that combines two of this century's biggest narratives -- global urbanization, and the unprecedented growth of China.' Rolf Potts, author of Vagabonding and Marco Polo Didn't Go There 'Wade Shepard cuts through the sensational coverage of China's infrastructure boom to deliver an eye-opening piece of reportage on the topic. A well-reported and fascinating primer on China's ghost cities.' Rob Schmitz, China Correspondent for Marketplace

Wade Shepard is Editor in Chief at The China Chronicle