Ghadi is a young teenager of Lebanese origin, living in Brussels. Like so many Lebanese emigrants, Ghadi’s family comes to Lebanon during the summer holidays. Ghadi spends his summer with his cousin and friends in the family’s mountain house, among whom Rawan, the daughter of his grand-parent’s neighbors. Ghadi and Rawan are very close friends, and at the end of summer, when each of them goes their separate ways, they stay in touch via e-mail. The novel is built on their correspondence. From the moment the plane lands, Ghadi misses Lebanon and his friends, dreaming of the next summer. He has many friends at school, but he is also bullied by an older boy. Rawan, with her sense of humor and creativity is quite popular among her friends, and that year decides to run for the elections of the students’ representatives. Tensions at home are nevertheless more and more palpable, as Rawan’s father regularly comes home in a very bad temper. Rawan is convinced that her parents are on the verge of divorce. Having overheard a phone conversation, she also believes that her father has a lover. This situation is distressing, and Rawan has trouble concentrating at school. She feels lonely, and her anxiety pushes her away even from her closest friends. Meanwhile, in Brussels, Ghadi gets mixed up in drugs, unwillingly, and falls under the power of the boy who’s been bullying him. Each on their own, Rawan and Ghadi will find ways out of their problems, and will learn and grow from their experiences, while their friendship strengthens. With this novel for young adolescents (13 year olds), the two authors tackle issues that are central in the lives of young teens all over the world. The relationship to family members, to friends and classmates, drugs and violence, unemployment, racism, exile, identity and roots, are all issues that are touched upon in the novel. 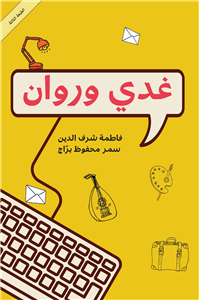 Fatima Sharafeddine is a writer, translator and editor of children and young adults’ literature, living in Beirut and Brussels. She has won a number of awards, including the Bologna Ragazzi New Horizons Award 2016. She was nominated for the prestigious Astrid Lindgren Memorial Award three times, in 2010, 2011, and 2016. Fatima has written and published over 120 books, many of which have been translated to different languages. Samar Mahfouz Barraj, previously a teacher, she has been writing children books since 2007. She published over 34 works. One of them, “My grandmother will always remember me” was translated into Spanish.

Dar al Saqi is an award-winning independent publishing house based in Beirut. Founded in 1990, their books cover various subjects including children's and young adults’ for ages between 3 and 18.

Invitation Programme Kids has chosen to review this offer before it proceeds.