Gardening Across the Pond

Anglo-American Exchanges, from the Settlers in Virginia to Prairie Gardening

For four hundred years there has been a special relationship between Britain and what is now the United States of America in many aspects of life, not least in gardening.  From the early settlers taking their familiar English plants to the New World and early plant-hunters bringing back exciting new plants for English gardens to the twenty-first-century English infatuation with ‘prairie gardening’, ideas and plants have been crossing and re-crossing the Atlantic. In Gardening Across the Pond Richard Bisgrove investigates this interchange. He begins with the Tradescants plant-hunting in seventeenth-century Virginia and moves on to the influence of the eighteenth-century English landscape garden on Thomas Jefferson, Andrew Jackson Downing and Frederick Law Olmsted, the Quaker connection of John Bartram in Philadelphia and Peter Collinson in London – bringing American plants to furnish those gardens. In the nineteenth century Anglophile Americans plundered Europe as a whole in their search for culture, including horticulture, while in the twentieth century the balance of innovation moved to the US, with Thomas Church’s ‘room outside’ and James van Sweden’s ‘bold romantic garden’. In the twenty-first century, with transatlantic travel commonplace, the ebb and flow continues unabated, with prairie landscapes in the 2012 London Olympic Park and Gertrude Jekyll gardens in the US.  Gardening across the Pond explores these and many other transatlantic influences and attempts to answer that thorny question – is the English cottage garden an American invention? 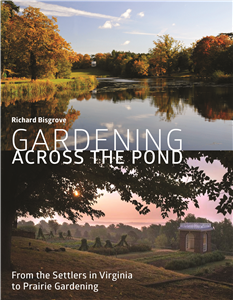 Richard Bisgrove recently retired as Course Director in Landscape Management at the University of Reading. He has a BSc in Horticultural Science from Reading University and an MLA in Landscape Architecture from Michigan. He served on the National Trust’s Gardens Panel for nearly twenty years and has held several posts in the Garden History Society. In 2004 he was awarded the Veitch Memorial Medal by the Royal Horticultural Society for ‘outstanding contribution to horticultural education, garden design and plant research’ and in 2010 the President of the Landscape Institute conferred on him the Peter Youngman Award for ‘outstanding contribution to landscape’. He lectures internationally and has written several books on garden design and garden history, including The Flower Garden: Planting for Year-Round Colour (Frances Lincoln, 1990), The National Trust Book of the English Garden (Penguin, 1992), the bestselling The Gardens of Gertrude Jekyll (Frances Lincoln 1992), and William Robinson: the Wild Gardener (Frances Lincoln, 2008).