Gandhi and the Ali Brothers

Biography of a Friendship

The campaign of the Khilafat Movement and the Ali brothers’ close collaboration with Gandhi are well acknowledged in the pages of history. It is also well known that after the collapse of the Khilafat–Non-cooperation Movement, the relationship between them became strenuous, and the Ali brothers moved away from Gandhi. But what is not so well known is that the promise of the relationship when it was forged was astounding, and Gandhi saw it as a solution to the problem of Hindu-Muslim unity, which he considered fundamental to India’s independence. This book is a study of the relationship between Gandhi and the Ali brothers mainly in the context of the Non-cooperation and Khilafat Movements, focusing on the period of 1919–1931. Gandhi’s involvement in the Khilafat agitation was his first direct intervention in an exclusively Muslim question, translating it into a national question. This was his way of bringing the Muslims out of their community cocoons into the mainstream of India’s national politics. However, as his relationship with the brothers broke down, this turned out to be also his last such intervention. Consequently, the issue of Muslim participation remained unsettled till Partition. Gandhi and the Ali Brothers narrates the story of the coming together, the joint struggle and the parting of ways of Gandhi and the Ali brothers. It documents a lucid micro-history of the momentous developments in the personal relations of these political figures, with the dynamics of Hindu-Muslim interface as the backdrop. 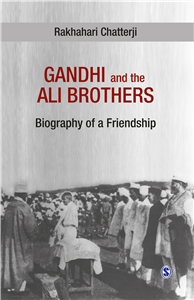