A Novelized Account of the Life, Death, and Legacy of Ahmed Shah Massoud

FROM THAT FLAME follows journalist Michelle Garrett as she interviews the legendary Commander Ahmed Shah Massoud – the “Lion of Panjshir” – in Afghanistan’s rugged Hindu Kush Mountains. Without warning, an attack by Taliban and al-Qaeda troops propels Michelle into a wartime adventure with Commander Massoud and his Mujahidin, one in which a friendship between the journalist and Massoud grows, giving her a unique perspective into the man the Wall Street Journal credited as being “the Afghan who ended the Cold War.” 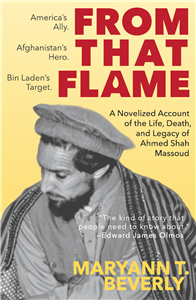 All countries and languages available

Kallisti Publishing produce personal development and business books that expand the mind, generate ideas, and grow profits. They believe when you read, you succeed.

Kallisti Publishing Inc. has chosen to review this offer before it proceeds.