From Silver Screen to Spanish Stage

The humorists of the Madrid vanguardia and Hollywood film

The work of the humorists of the Madrid vanguardia continues to be enjoyed in the Hispanic world and to be explored by scholars of modern culture in Spain. Yet virtually no academic attention has been paid to them in Engish-speaking academe. This is the first book-length study of the group as a whole, and analyses their responses in print and on stage to Hollywood film from the 1920s to the 1960s, a feature of their work often signalled but never examined in detail. With the advent of the talkie and the raising of the language barrier, Hollywood studios recruited writers from continental Europe to work on foreign-language versions of certain titles. Thus Tono, Edgar Neville, Enrique Jardiel Poncela and José López Rubio came to experience Hollywood first-hand. These four humorists and colleague Miguel Mihura had already established a reputation in Spain with prose writings and plays inspired by the avant-garde. Subsequently, they sought to innovate by exploiting Hollywood cinema’s visual style, narrative verve and madcap gags in their theatre. Drawing on archival work, the methodologies of theatre and film studies, and scholarly writings on Hollywood genres and stars, this book examines the humorists’ experiments on stage as the most significant early case in Spain of the ‘remediation’ of cinema and of what Philip Auslander describes as the ‘media epistemology’ generated by Hollywood’s immense popularity. It contextualises the humorists’ opinions and representations of the US and domestic film industries with reference to contemporary attitudes, outlines and implements a framework for the systematic study of ‘remediation’ in the humorists’ stage adaptations of films and original plays, and traces the influence of Charlie Chaplin and the Marx Brothers in their comic devices. The curtailing of such experimentation shortly into the Franco dictatorship exemplifies the conservatism of this period of Spanish culture. 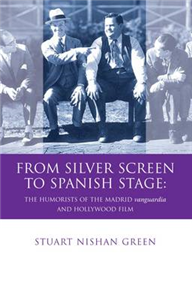