From Ship's Cook to Baronet

Sir William Reardon Smith (1856-1935) was one of the foremost figures in south Wales in the early twentieth century. His was a classic story of ‘rags to riches’ - starting life as a deck-hand and ship’s cook sailing from his native Appledore in 1870, he was a master mariner at the age of twenty-two and subsequently commanded many of the fine sailing ships owned by Hugh Hogarth & Sons of Glasgow. A long-cherished ambition to become a shipowner was eventually realised in 1906 when he acquired his first steamship, City of Cardiff. The venture prospered and nine vessels were owned on the eve of the First World War. He subsequently showed great entrepreneurial initiative during the depression, acquiring motor vessels and establishing new trade routes. He is also remembered as a great philanthropist, particularly through his association with the National Museum of Wales – during his term as treasurer (1925-28) and president (1928-32), he restored the museum’s faltering finances and enabled the construction of the it’s east wing which is now so integral a part of Cardiff’s dignified civic centre. His establishment of the Reardon Smith Nautical School in Cardiff in 1921 was another notable achievement; this school provided an opportunity for aspiring deck officers to learn the essential skills appropriate to their chosen careers. He also funded hospital developments in Cardiff and Bideford, and endowed the chair of geography at Exeter University. At the time of his death in December 1935, fulsome tributes were paid to him both by his fellow shipowners and by the principals of those organisations which had benefitted from his generosity; many of those who live in south Wales and the West country today still enjoy that legacy 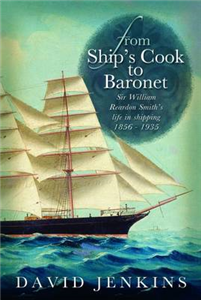