Five Days That Shocked the World

Eyewitness Accounts from Europe at the End of World War Ii

This is the story of five momentous days at the end of the war, from the execution of Mussolini and the surrender in Italy to the announcement on German radio that the Führer had fallen at his post, fighting to his last breath against Bolshevism. Drawing on a wealth of unfamiliar material, Nicholas Best tells a compelling tale of the men and women across Europe who heaved a collective sigh of relief as the news they had all been waiting for came over the radio – that the two dictators, the most hated men in the world, were dead at long last. 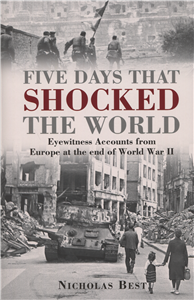 The Andrew Lownie Literary Agency Ltd, founded in 1988, is now one of the UK's leading boutique literary agencies with some two hundred non-fiction and fiction authors and is actively building its fiction list through new agent David Haviland.It prides itself on its personal attention to its clients and specialises both in launching new writers and taking established writers to a new level of recognition. Andrew Lownie was short-listed at the British Bookseller Awards for Literary Agent of the Year 2013 and 2014.