What We Can Learn from the World’s Happiest Country

Onnen maa The land of happiness In 2018, 2019 and 2020, the World Happiness Report ranked, the World Happiness Report ranked Finland the world's happiest country, both for its total population and for the immigrants living there. The United States and the UK were placed eighteenth (fifteenth for immigrants) and nineteenth (twentieth for immigrants), respectively. The Nordic Model has long been touted as the aspiration for social and public policy in Europe and North America, but what is it about Finland that makes the country so successful and seemingly such a great place to live? Is it simply the level of government spending on health, education and welfare? Is it that Finland has one of the lowest rates of social inequality and childhood poverty, and highest rates of literacy and education? Finland clearly has problems of its own – for example, a high level of gun ownership and rising rates of suicide – which can make Finns skeptical of their ranking, but its consistently high performance across a range of well-being indicators does raise fascinating questions. In the quest for the best of all possible societies, Danny Dorling and Annika Koljonen explore what we might learn from Finnish success and what they might usefully learn from us. Contents Part I The Context 1. Geography and climate 2. History amid empires 3. Economy and welfare Part II Social Policy 4. Childhood and education 5. Mid-life and equality 6. Old age and health Part III The Future 7. Politics and populism 8. Demography and environment 9. Success fatigue Appendix: Finland among the best in the world. 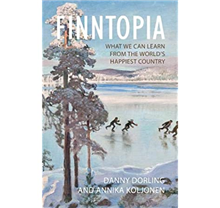 All translation rights available through Eulama

In the quest for the best of all possible societies, what might we learn from Finnish success and what might they usefully learn from us?

"Among the world’s countries, Finland ranks at or near the top in air quality, education, equality, happiness, honest government, milk consumption, opportunities for children, preparedness, safety, trust in its police, and many other things. Eighty years ago, most of those things were not true. How did Finland become so successful, so quickly, across such a broad spectrum? How can other countries achieve Finland’s happiness? Read this wonderful book, and learn the answers!"
-- Jared Diamond, Professor of Geography, UCLA, and Pulitzer-Prize-winning author
"As inequality reaches eye-watering levels around the world, this book contains some fascinating and important lessons on how policies like progressive taxation and investing in public services can lead to more equal -and happier- societies."
-- Danny Sriskandarajah, Chief Executive, Oxfam GB
"An absorbing, insightful, and scholarly book, grounded in emancipatory hope and humility, that captures the very essence of why Finland has become one of the most equitable countries in a highly unequal world."
-- Paul Stepney, Adjunct professor of Social Work, Tampere University
"Finland is one of the fairest, most inclusive, and dynamic countries to live in. This is not because it is small or culturally homogeneous, or enjoys a great deal of oil wealth. As Dorling and Koljonen show us in this marvelous book, it is because of what Finns have learned about ‘caring for each other more and more cleverly’ over recent decades."
-- Simon Reid-Henry, associate professor in the School of Geography, Queen Mary, University of London
"Finntopia is the remarkable story of a country on Europe’s perceived fringes that should instead be in the center of our view for creating a better society. Dorling and Koljonen provide a compelling picture of why Finland may not be the utopia that it sometimes is portrayed as, but can still teach us many lessons about a different kind of politics, one that has the interest of people at its heart."
-- Benjamin Hennig, Professor of Geography, University of Iceland
“A fascinating book which reads like a detective story. It makes one wonder if the secret behind the happiness of Finns is their ignorance of their own happiness. There is much to learn from Finntopia, even for a native Finn.” --Juha Kaakinen, chief executive of the Y-Foundation (that has built 6500 homes for the homeless in Finland).
“Annika Koljonen and Danny Dorling’s portrait of Finland´s socio-political system and history is a thought-provoking to read. They convincing demonstrate that the most profitable investment any institution or country can make is to invest in the wellbeing, education, and capabilities of its people.”
--Mikko Weckroth, Postdoctoral researcher, Helsinki Institute of Sustainability Science.