Fifty Years in Politics and the Law

by The Rt Hon Lord Morris of Aberavon (Author)

There is no other inside account from a minister who was at the Cabinet Committee table drafting devolution proposals, first in his role as Welsh Secretary and then as Attorney General. He is one of the very few who served as a minister in four Labour governments under Harold Wilson, Jim Callaghan and Tony Blair between 1965-1999. His account, put in a narrative form, of the role of the Law Officers in the Kosovo War is unique, where as Attorney General he developed the doctrine of armed intervention in the affairs of another state – without a Security Council Resolution, in order to avert an overwhelming humanitarian disaster, culminating in his appearance as Counsel for the United Kingdom in the International Court of Justice in the Hague, the United Kingdom being one of the defendants. During over fifty years in both Houses of Parliament he rode the two horses, politics and the law simultaneously, and when not a Minister of the Crown practised the criminal law as a barrister and sat as a Crown Court Recorder. His main political mission has been the working out the basis for legislative proposals for setting up all-Wales institutions and his battles with Ministers and Parliamentary colleagues are described in detail, by someone who was there. His proposals were defeated overwhelmingly in a Welsh Referendum when he commented “When you see an elephant on the doorstep you know it’s there”. A subsequent Act, mainly based on his original proposals with some additions, was eventually agreed to by a paper-thin majority in a second Welsh Referendum, and by a substantial majority giving wider powers to the Welsh Assembly in a third Referendum. 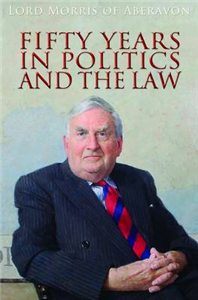