Cardiganshire was one of the few counties of England and Wales whose populations in 1911 were less than in 1851. This was despite natural increase, indicating that considerable out-migration was taking place. Indeed, the movement out of central and west Wales has formed the most consistent de-population trend in Britain apart from that from the Highlands of Scotland. This book explores the chronology and geography of out-migration from Victorian Cardiganshire, with particular reference to the dramatic decline that gathered pace from the 1870s. Contemporary source material is used to examine socio-economic conditions in nineteenth-century Cardiganshire. Factors that prompted the outward movement are identified, and features of rural life that were crucial to the migration process are revealed. Central to the book is computer-assisted analysis of data from the Victorian census. The trend of rural out-migration in nineteenth-century England and Wales is examined, and the experience of Cardiganshire is set within this context. The major destinations for the county’s migrants were Glamorgan, Carmarthenshire, London, and Merseyside; and analysis of the census data focuses on key aspects of the Cardiganshire migration to these destinations. The book concludes with a brief examination of nineteenth-century emigration from Cardiganshire, drawing on contemporary newspaper reports, harbour records and private letters. Key sending areas and destinations are identified; motivations for emigration are considered; and the role of a common culture and a shared background of geographical and family origins within the migration process is explored. This is the only study of migration in Victorian Britain that deals with both the sending area and the destination communities in any detail. 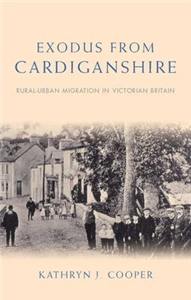