Saving Lives under Fire in Afghanistan

This book is for heroes. Dustoff 7-3 tells the true story of four unlikely heroes in the rugged mountains of Afghanistan, where medics are forced to descend on wires to reach the wounded and helicopter pilots must fight wind, weather, and enemy fire to pluck casualties from some of the world's most difficult combat arenas. Complete opposites thrown together, cut off, and outnumbered, Chief Warrant Officer Erik Sabiston and his flight crew answered the call in a race against time, not to take lives-but to save them. The concept of evacuating wounded soldiers by helicopter developed in the Korean War and became a staple during the war in Vietnam where heroic, unarmed chopper crews flew vital missions known to the grateful grunts on the ground as Dustoffs. The crew of Dustoff 7-3 carried on that heroic tradition, flying over a region that had seen scores of American casualties, known among veterans as the Valley of Death. At the end of Operation Hammer Down, they had rescued 14 soldiers, made three critical supply runs, recovered two soldiers killed in action, and nearly died. It took all of three days. 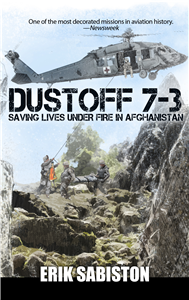 "You want to know what the phrase "courage under fire" is really all about? Read Erik Sabiston's Dustoff 7-3." --John Weisman, 7-Time New York Times bestselling author of "KBL" "A gripping and heart-pounding tale of duty - and near death for the chopper crew - Dustoff 7-3 represents a war story of gallantry." - Richmond Times Dispatch "Erik Sabiston and the crew of Dustoff 7-3 are real-deal American heroes." - Scott MacTavish Author of Battle Ready & director of MURPH: The Protector "This is a great book! It puts you in the seat and offers an intimate look at the men and women who put it all on the line when troops are in need." - Kevin Maurer, #1 NY Times bestselling author of "No Easy Day" "unsuccessfully fighting back tears as I listen to the Dustoff 7-3 crew" - Arienne Thompson, USA Today "It's about time their story is told." - Leslie Marshall, FOX News Channel & Nationally Syndicated Radio Columnist "I used to wonder who those angels were that flew into our most hellish moments in combat, those men and women who would risk everything to save us or at least return our dead. After reading Dustoff 7-3, now I know." MAJ (Ret.) Rusty Bradley - Author, "Lions of Kandahar" "You guys are crazy!" - Renee Montagne, NPR News "A brave, cool hand behind the stick by necessity, Sabiston also writes astutely, cutting his deck of drama-riddled "cards" with slices of wry humor and true-life human interest. In doing so, he deals a winning hand." - Vertical Magazine "This story is extraordinary." - Martha Raddatz, ABC News I expected adrenaline junkies or war cowboys, but instead found four regular people susceptible to the same fears and doubts as anyone else. --Tony Dokoupil NBC News Absolutely incredible. --Charlie Rose CBS News

Veteran UH-60 Blackhawk pilot Erik Sabiston is the author of Dustoff 7-3. Before becoming a soldier he worked as a bartender, music teacher, butcher and even a door-to-door salesmen. He lived off the grid for two years in the redwood forest, then joined the Army after 9-11. Over a three day period he and his crew performed some of the most death defying rescues in the Afghanistan war while unarmed and under enemy fire.

War stories need to be published, distributed, and consumed if we are to understand the mentality and motivation of military people. And we must do that to appreciate their service and sacrifice on behalf of this nation and our people. That’s a worthy endeavor and it’s what our little band of authors and editors is dedicated to at the Warriors Publishing Group.

Warriors Publishing Group has chosen to review this offer before it proceeds.