Learning from Fellow Educators in Malaysia, Mexico, Canada, and the United States

This book is based upon research conducted both before and after a visit to Kota Kinabalu, Malaysia in March, 2003. During this time period United States (US) bombs fell on Baghdad, Iraq. An invasion of US and British ground forces in Baghdad and other Iraqi cities followed the initial bombing. Events during the onset of the war became a catalyst for gaining insight on how the US invasion of Iraq impacted the lives of teachers and their students in Malaysia. In June and July of 2003, the researcher returned to interview educators in Sabah, Malaysia. Follow-up electronic communications with educators were conducted through the remainder of 2003._x000D_ _x000D_ After the research in Malaysia, the researcher conducted studies of educators' perspectives in Mexico, Canada, and the US. The key objective of the investigations in all four countries was to uncover attitudes and pedagogical comparisons of educators and their students regarding US policies, including war and counter-terrorism policies. Studies in the US took place in close proximity to the US/Mexico international border. Studies were analyzed through the lenses of place-based pedagogy, border pedagogy, and issues-centered approaches that provided baseline information for transnational comparisons and cross-comparative case studies. In this manner, the researcher contemplated the intersection of a critical pedagogy of place and border pedagogy. From these studies emerged new understandings and the development of a critical border dialogism . This critical border dialogism is based on following principles: heteroglossia, meliorism, critical cosmopolitanism, nepantla, dialogism feminism, and pragmatic hope. By its nature critical border dialogism engages us in multidirectional discourses that allow us to tackle issues and work toward enduring conflict resolutions. When applied in classroom settings critical border dialogism moves educators, students, and cultural workers in the direction of a critical border praxis. 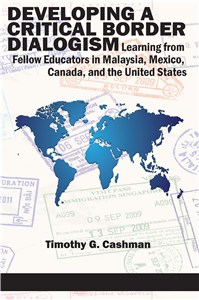