Philosophy of education basically deals with learning issues that attempt to explain or answer what we describe as the major questions of its domains, i.e., what education is needed, why such education, and how would societies undertake and achieve such learning possibilities. In different temporal and spatial intersections of people’s lives, the design as well as the outcome of such learning program were almost entirely indigenously produced, but later, they became perforce responsive to externally imposed demands where, as far as the history and the actualities of colonized populations were concerned, a cluster of de-philosophizing and de-epistemologizing educational systems were imposed upon them. Such realities of colonial education were not conducive to inclusive social well-being, hence the need to ascertain and analyze new possibilities of decolonizing philosophies of education, which this edited volume selectively aims to achieve. The book should serve as a necessary entry point for a possible re-routing of contemporary learning systems that are mostly of de-culturing and de-historicizing genre. With that in mind, the recommendations contained in the 12 chapters should herald the potential of decolonizing philosophies of education as liberating learning and livelihood praxes. “This collection of critical and scholarly analyses provides an insightful and timely resource for decolonizing philosophies of education that continue to shape discourses, policies, curricula and practices in all levels of educational and social institutions. It also usefully challenges versions of postcolonial studies that fail to recognize and demystify the continuity of colonial hegemony in contemporary societal formations in both the global north and south.” – Toh Swee-Hin, Distinguished Professor, University for Peace, Costa Rica & Laureate, UNESCO Prize for Peace Education (2000) “Decolonizing philosophies of education edited by Ali A. Abdi is a collection of twelve essays by noted scholars in the field who provide strong readings of postcolonialism in education with an emphasis on decolonizing epistemologies. It provides a clear and comprehensive introduction to the critical history of colonization, postcolonial studies and the significance of education to the colonial project. This is an important book that provides a global perspective on the existential and epistemological escape from the colonial condition.” – Michael A. Peters, Professor, Educational Policy Studies, University of Illinois at Urbana-Champaign 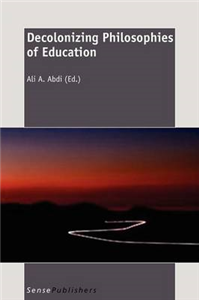 SENSE PUBLISHERS was founded in 2004 and is today the fastest growing publisher of books in Educational Research and related fields, featuring a current backlist of just over 1000 titles and more than 140 new titles published annually.With offices in Rotterdam (The Netherlands), Boston (USA), and Taipei (Taiwan), and a cast of top international authors that make up a veritable "Who's Who" in their specialities, Sense brings a true global perspective to its publishing efforts.

Sense Publishers has chosen to review this offer before it proceeds.