Conflicting Perspectives on How to Fix the American Political System

Getting students to engage in debate always makes for a lively classroom. Yet when students only parrot partisan lines, an instructor is left to question if there is real pedagogical value in the exercise. Richard Ellis and Michael Nelson offer a fresh take on the traditional debate-style reader. With pieces written specifically for this volume by top scholars in the field, each pro or con essay considers a concrete proposal for reforming the political system, from making it easier to amend the Constitution to adopting compulsory voting. By focusing on institutions, rather than liberal or conservative public policies, students tend to leave behind ideology and grapple with claims and evidence to draw their own conclusions and build their own arguments. Students will explore how institutions work in their American government text, but Debating Reform: Conflicting Perspectives on How to Fix the American Political System helps them to understand how they can be made to work better. 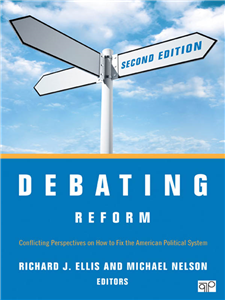