Physics and film seemingly have few academic features in common.  However, when local siren Bunny Baldwin, a student in the Film Studies Department at Cushing College, is found strangled to death on opening night of the Hitchcock Film Festival, Physics professor Edwina Goodman puts on her detecting hat.  Using her scientific sleuthing skills to assist her almost boyfriend Police Detective Will Tenney, the pair work together to investigate the campus murder.

Edwina wants to know––why did the murderer tie a strip of film around the victim’s head?  Why did the killer time the murder to coincide with the showing of the famous Hitchcock film Spellbound?  Was Bunny really killed by strangulation or did the unusual drugs found in her system suggest poisoning? Why do all the suspects have a seemingly airtight alibi?

There are certainly sufficient suspects as Edwina quickly ascertains.  The head of the Film Studies Department was having a torrid and practically public affair with the victim.  His wife was apparently furiuous, but not enough to keep her from also engaging in sexual hanky panky.  The victim had stolen a screenplay written by her roommate, Mary, to secure a Hollywood agent.  Mary is out for payback.  A quirky older woman who uses plants and other natural remedies to cure various ailments followed the head of the department around like a moon-struck calf.  And, of course, there’s the film department’s boy savant who plays chess with Edwina and keeps her updated on the various players.

Can Edwina use her knowledge of physics to unlock the strange features of this most unusual crime?  When a second murder occurs, it looks like she may––if the killer doesn’t find her first. 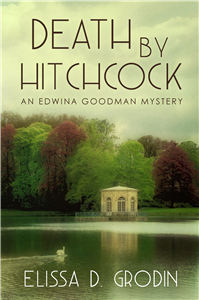 Elissa D. Grodin is a children’s author and novelist, and has written for the Times Literary Supplement.  She lives in New York City and Connecticut with her husband, actor/writer Charles Grodin. They have a son, Nicholas. Her first cozy mystery Physics Can Be Fatal, introduced her heroine Edwina Goodman.